Homelessness, Race, and The Home Coming 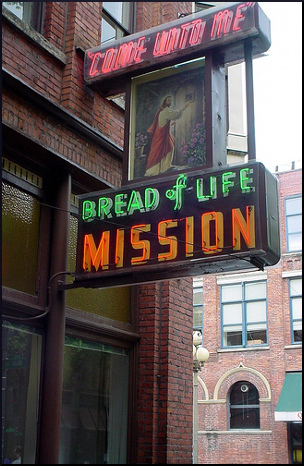 Here at House the Homeless we are still working our way through all the symbolism encapsulated in the figures of The Home Coming sculpture. In addition to being female, the elderly woman represents two other groups, one of which we look at today.

The creator of the artwork, Richard R. Troxell, has names for all the characters, and this lady is Anateen Tyson. Like the others, she has an entire backstory.

Her husband became disabled and unemployable, and finally went missing. The kids drifted away too, and the family dissolved. With only what she could carry, Ms. Tyson came to Austin hoping to stay with relatives, but similar misfortunes have befallen them, too, and they have no help to give.

Forlorn, depressed, and with vision clouded by cataracts, this woman wanders through the night with no destination and no hope. The statue captures the moment when she encounters a returned veteran named John and his daughter Colleen and their dog Joey. They welcome her to share the warmth of their fire, and we are warmed too, at the thought of the three displaced humans and one animal companion, forming an alliance that could lead to all kinds of beneficial results. Their commonality is stronger than their differences, and they bond.

But… the wonderful human moment depicted by the statue almost doesn’t happen. Because Ms. Tyson is a person of color, and John and Colleen are not, she initially hesitates, and almost fades back into the night without approaching them. We know this because it is part of the richly textured context of story behind this artwork. It rings true because real life unfortunately contains a lot of racism.

The people who in America are often known as Indians are known up north as Aboriginal Canadians (which only indicates that they were there first, since ab origine means “from the start”). Keeping in mind that the U.S. is very similar to Canada, we read the findings of a significant 2013 study of people experiencing homelessness in Calgary:

Aboriginal participants were found to be younger, less educated, more likely to be unemployed, to have experienced foster care, and to have been the victim of an attack. They tended to use health services more. These results are discussed in light of the social and political challenges facing Aboriginal people. They point to the need for attention to the special needs of Aboriginal people in plans to end homelessness.

In his short story “What You Pawn I Will Redeem,” from the collection Blasphemy, Sherman Alexie relates details about being down-and-out in Washington state. He remarks among the large number of homeless Indians in Seattle, who mostly came from Alaska looking for opportunity that is seldom found in the Lower 48, either.

The author assumes the persona of a young Spokane Indian with six years on the streets, a man who is not without self-respect, and who has his standards:

I’ve made friends with restaurant and convenience-store managers who let me use their bathrooms. I don’t mean the public bathrooms, either. I mean the employees’ bathrooms, the ones hidden in the back of the kitchen or the pantry or the cooler. I know it sounds strange to be proud of, but it means a lot to me.

Many Anglos tend not to understand the particular challenges presented by racism in every area of American life. For instance, take the childhood obesity epidemic. Parents are advised to let their children play outside and get plenty of exercise. But the nonprofit organization Salud America! completed a study on race, ethnicity, and access to public recreational space. In four out of five predominantly Latino neighborhoods there is no access to parks or recreation facilities.

Others may shake their heads and say, “If they don’t want their kids to be fat, they should just send them to the park to run off the extra pounds.” Easy advice to give, but not easy advice to follow when the circumstances simply don’t support it. It’s like advice about how to avoid homelessness, or how to escape homelessness. Tactics that work for one person, or type of person, are not always guaranteed to bring success to someone else, or to a whole different ethnic group.

According to the National Alliance to End Homelessness, most minority groups make up a larger share of the homeless population than they do of the general population. For instance,

Despite numerous socio-economic disadvantages, in this one respect, Hispanic Americans are relatively well off. They are 18% of the entire populace, but 21% of people experiencing homelessness, so that’s not too awful of a discrepancy. African Americans, on the other hand, are 13% of the American population, but 40% of the homeless population — a shockingly large discrepancy. The Alliance goes on to say,

Any effort to end homelessness in the United States must address the range of issues that have resulted from racial inequity. This includes assuring affordable, stable housing for all.

Source: “Are There Differences between the Aboriginal Homeless Population and the non-Aboriginal Homeless Population in Calgary?”, HomelessHub.ca, 2013
Source: “The Insidious Reason Latino Kids Are More Obese Than Their Peers,” TakePart.com, 01/12/16
Source: “Racial Disparities in Homelessness in the United States,” EndHomelessness.org, 06/06/18
Photo credit: Mahalie Stackpole on Visualhunt/CC BY-SA