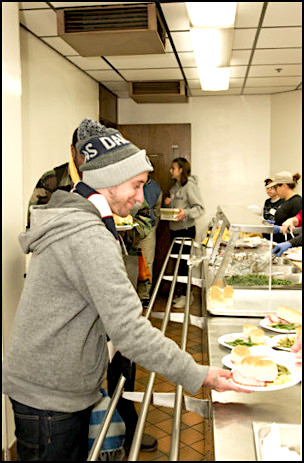 On the first of January, 403 guests attended the 17th Annual Thermal Underwear Giveaway Party for food, music, and clothing items to help “winterize” them. As always, they had the option of responding to a survey devised by House the Homeless. This year, the survey explored the extent of their knowledge about the steps involved to access housing. Data was supplied by 222 people.

The survey revealed some interesting background facts gleaned from information collected in past surveys of the Austin homeless community. Compared to the numbers 20 years ago, the average duration of their homeless state has dropped from close to seven years back then, to about 4.5 years now.

That’s the good news. But homelessness is being experienced at a more advanced age than before. Twenty years ago, the average age was around 40; now it’s pretty close to 50. America has senior citizens on the streets, and that’s not a good look.

A special effort was made, with the help of Community Sunrise Church, to include in the survey 29 people who live beneath overpasses, who are particularly vulnerable because of planned infrastructure work that will displace them. As we have discussed, this is a particularly threatened sector of the homeless community at the moment. As a national problem, it will grow to affect an estimated 100,000 people.

More than half of the people who took the survey (132 people individuals) consider themselves disabled, although only 50 of them receive disability benefits. This indicates that 82 from that group may be eligible but are not receiving benefits. This is crucial, because the way it works in Austin is that a person needs some kind of income in order to apply for housing from the non-profit agencies.

Astonishingly, among the 222 who took the survey, only 60 people were signed up for Section 8 Housing. Among those 60 people, only 22 knew their placement number on the Section 8 Housing list. Granted, at this juncture in time, housing may be impossible to obtain. But presence on even the longest waiting list sometimes results in eventual success, so knowing how to comply with the system’s requirements is essential.

Some people are so discouraged they just don’t try any more. Things are grim out there. Anywhere in the country, even for a person who has a full-time job at the federal minimum wage of $7.25 per hour, rental housing is almost impossible to find. For more detail on this, we going to go ahead and recommend previous House the Homeless posts including:

The way it works in Austin is:

All private non-profits creating housing use the Coordinate Assessment, CA, evaluation system to determine what kind of housing an individual is eligible to receive. So, because CA serves as a single point of entry for housing, it is imperative that each individual know what CA is, where it is located, what is an individual’s assigned number, and who do they contact to follow up.

Only 64% of the people surveyed at the Thermal Underwear Giveaway event had completed Coordinated Assessment. On average, those individuals have gone through the process three times each!

Not even one out of ten knew their CA number. As for remembering or having documentation of the person’s name who conducted their assessment, or even of the organization where this occurred, the odds are slim. Only 20% of the respondents said they knew who to follow up with.