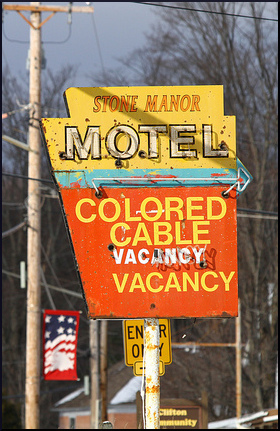 A trend is developing that cannot be headed in a good direction. House the Homeless looked last time at parts of America where increasing numbers of people live in a weird limbo between homeless and housed. With varying degrees of official help, they live in motels.

The rules and customs are different according to locality, but everywhere there is a version of the “nuisance motel.” Often, this means nothing more sinister than that people who live there tend to litter, and sometimes need to work on their cars.

New Jersey has its own set of laws, and a motel can be divided between short-term and extended-stay lodgings, which complicates things more. Code violations abound, because the owners are not concerned about pleasing customers to earn good Yelp ratings.

When a housed person who is merely traveling leaves a bad online review “homeless shelter motel” might be the chosen insult. Generally, tenants just put up with bed bugs, roaches, broken windows, and non-functioning locks — because they have nowhere else to go.

Even if there is government financial support to convert motels into housing for those who have no permanent addresses, approval is often hard to get. Local residents say that housing the homeless will attract drugs and violence. Now, consider the system in place in a pricey establishment where the rooms are paid for with performance bonuses, trust funds, and corporate expense accounts. In fancy hotels, drug transactions routinely happen that put the paltry nickel-and-dime motel deals to shame.

If there is trouble, the upscale hospitality business handles the matter discreetly. Favors are called in, and awkward circumstances are swept under the carpet. Witnesses are paid off or intimidated. Except in very extreme cases, authorities are not notified. Apparently, it is not actually the illegality that society worries about but the economic standing of the people who do the deeds.

In Central Florida, things changed a lot after the 2008 economic crash. The former massive number of Disney World travelers shrunk, and so did the need for roadside motels.

Typical of news articles covering this story was one by Saki Knafo, which centered on a family that had lost their New Orleans home to Hurricane Katrina, and then had been flooded out again in Nashville. The husband had put in applications at 167 restaurants and only heard back from one of them. The parents and young daughter were able to rent a motel room for $149 per week, and even then found it necessary to sublet the room’s second bed to a Vietnam veteran. There are thousands of similar stories in Florida.

California is different. Herds of travelers still turn up in Los Angeles and San Francisco. Expedia.com says “Motels are in high demand in Los Angeles.” When some motels are repurposed to shelter local unhoused people, it cuts down on the number of places where out-of-towners can stay. For those who can afford them, expensive lodgings are always available. People on a strict budget might try sleeping in their car in a parking lot or, more likely, just stay home.

Another option is signing up with Airbnb, and here is where the circularity kicks in. House the Homeless has written about this business model before. In cities that still get plenty of commercial travelers and tourist action, its existence has totally changed the rental landscape. Too often, regulations that try to mitigate the damage are weak or unenforceable.

Early in 2014, Katy Steinmetz described how San Francisco landlords were evicting long-term tenants in order to take apartments off the market, not even willing to forego the extra profit that would be lost by waiting until their leases expired. To describe what Airbnb greed was doing to the local stock of housing, critics used the word “cannibalize.” People who could afford to invest would rent apartments they had no intention of living in, but that they could, in turn, rent out by the night or weekend to travelers.

Property owners resented their tenants making fortunes from short-term referrals and started writing “no subletting” into leases if they hadn’t already. Ambitious middle-man mini-landlords were kicked out, so the actual owners could go into the Airbnb racket.

Rents continued to rise. Jennifer Friedenbach of the Coalition on Homelessness told the press, “Eviction is the driving force of homelessness.” And Maria Zamudio of Causa Justa said, “There are over 3,000 homeless children in San Francisco. Airbnb’s practice of turning homes into hotels is exacerbating those conditions.” Outside the corporation’s San Francisco headquarters, activists demonstrated vigorously.