Miami’s Pit Stops — a Tale of One City 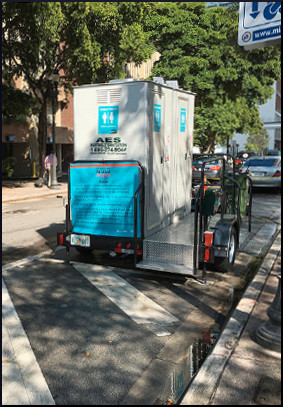 Alert readers of House the Homeless blog have noticed that toilets have been a theme. We haven’t even gotten into showers or laundry, because there is so much to say about the most basic of sanitary facilities.

Latrines, and the means to wash hands after using them, are the building blocks of civilization. Toilets are a basic necessity and people experiencing homelessness need them.

Aside from the human suffering and indignity, and the menace to public health posed by a lack of toilets, there is another serious issue. In a societal/cultural/political absurdity that is indistinguishable from actual insanity, people are acquiring criminal records for public elimination when there is literally no other choice. Let’s take a close look at how one American city is working on the problem.

Last year, Miami, Florida, experienced a long period of civic unrest over toilets. Attempting to shame the Dade Homeless Trust into using some of its $55 million of public money for a public restroom project, Downtown Development Authority board member Jose Goyanes made a video titled “Homeless Urine & Feces in Miami May 2015.” The DDA also prepared an infographic — a map of the downtown area with little feces icons in appropriate places.

The unimpressed administrator wouldn’t even look at the presentation, and scolded Mr. Goyanes for assuming “that the Homeless Trust is responsible for anything and everything involving homeless individuals.” Ron Book, who has run the Trust since Hector was a pup, told reporters:

We are not going to be putting toilets or showers in downtown Miami… We’ve looked at this several times over the last 10 to 12 years and we are just not doing it.

These folks think I’m supposed to divert scarce resources and be on poop patrol and clean up after homeless folks. My priority is homes and getting people off the streets, not providing poop stations.

In Book’s world, a $55 million budget is “scarce resources.” Also amazing is that such a high-ranking official believes that people only do one thing in a restroom.

Book’s theory, which is no doubt eagerly adopted by officials in other cities, goes like this:

Mainly, this view seems counterproductive. When the first thing a person has to do on arrival at a job interview is ask for directions to the restroom, what kind of a start is that? Maybe if people had some basic amenities to work with they wouldn’t need to depend on the Trust for additional help.

Meanwhile, because the lack of bathrooms might change some hardcore street people’s minds about turning themselves over for rehab or whatever, everybody else could just wear diapers. It came down to a big County Commission board meeting with merchants, local residents, representatives from the City, the Homeless Trust, and the DDA. Whether the meeting was attended by any people experiencing homelessness was not noted.

Mayor to the rescue

Apparently, the Commission could have compelled the Homeless Trust to pay, but that turned out not to be necessary, as Mayor Tomas Regalado dipped into a multi-million dollar discretionary fund and pulled out $500,000. The order was made for four portable toilets, described as “airplane bathrooms on wheels.” A truck brings them around to designated spots at 2 PM and takes them away at 9 PM. They are open for less than one-third of the day, which is better than nothing.

In mid-December, the mayor and the DDA were happy to report that after only two months, the pilot program had more than halved the number of human-feces complaints. By the six-month mark, the effort had reduced the piles of downtown feces by 57%. As a bonus, the program turns out to cost less than the budget anticipated, so funds will carry it through to October.

The success of the Pit Stops is attributed to having attendants on duty. Among other chores, the worker knocks on the door after five minutes of occupancy. One of these monitors told a reporter that the toilets are used not only by street people, but by police, bus drivers, and government workers.

A lot of elderly people live in Miami, and a lot of tourists visit the city. Surely they appreciate restrooms too. The DDA’s Ken Russell said:

So, a few jobs have been created, although the seven-hour daily shift inspires the question of whether anyone gets full-time benefits.

Last month, it was reported that Miami will invest in three permanent public toilets. Construction for the first one starts in October, with an opening date in December. The funding? The county, the city, and the DDA.